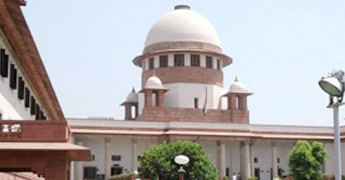 The highest court of the land ordered a stay of the judgment and permitted status quo to continue on the disputed site.
While ordering status quo in the disputed site, a division bench of the court consisting of justices Aftab Alam and R.M. Lodha said the land was divided among three parties despite none of the parties sought such a division.
As per the latest order of the SC, prayers at Ram Lala’s make-shift temple at the disputed site in Ayodhya would go on as usual. “There shall be no religious activity on the 67 acre land acquired by the central government adjacent to the disputed structure but status quo shall be maintained with regard to the rest of the land,” said the Bench.
The Lucknow bench of the Allahabad High Court had in September last year passed the verdict directing partition of the 2.77 acre, which contained the disputed structure, into three parts among Muslims, Hindus and Nirmohi Akhara.
Nirmohi Akhara challenged the verdict in the Supreme Court arguing the said division of the land would not serve any purpose.