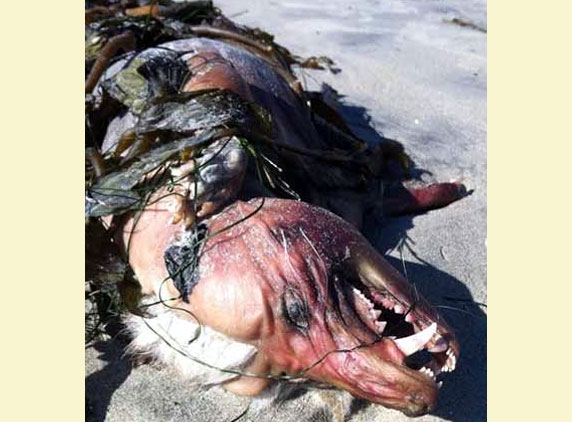 “One man who was looking after the sheep in their pens said he saw the creature responsible for the attacks. He reportedly said it had fangs, claws and wings.” As retold by a man who saw the creature.

It is quite common in Latin America, not a month passes without a new tale about the sightings of `Ghost Sucker’ or Chupacabra. This rare animal seems to attack only in few areas of America, is fond of goat blood and thrives on it. This eventually leads to the death of the goat. Innumerous incidents were reported and it is a regular one. But a report recently going viral on the net is a chupacabra has been found washed up on the shores of San Diego by a surfer from Massachusetts. The story started when a rancher on March 01 in the Mexican state of Michoacan reported that 35 sheep were killed in their enclosure. And a few days later the debris was spotted on the shores. Well there are wide speculations rife, about the animal and its mysterious ways of dying.

The chupacabras (literally "goat sucker") is a legendary cryptid rumored to inhabit parts of the Americas. It is associated more recently with sightings of an allegedly unknown animal in Puerto Rico (where these sightings were first reported), Mexico, and the United States, especially in the latter's Latin American communities. The name comes from the animal's reported habit of attacking and drinking the blood of livestock, especially goats. (With inputs from internet: AarKay)