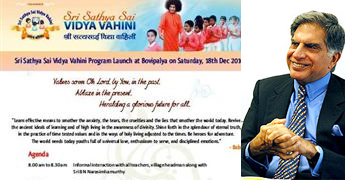 The programme will introduce special computer education in all Satya Sai schools located across the state and run by the Satya Sai Central Trust. Ratan Tata made a promise during the last birth day celebrations of the Baba that he would launch this programme with his company’s contribution.

True to his promise, he arrived in Puttaparthy today and launched the programme along with the trust members of the Satya Sai Central Trust. Prior to launching the programme, Ratan Tata visited Baba Samadhi and offered prayers. He placed a wreath at the Samadhi of Baba.

He later left for Mumbai by his special flight. Before he took off, he also visited the Yajurmandiram where Baba’s wealth was being counted.