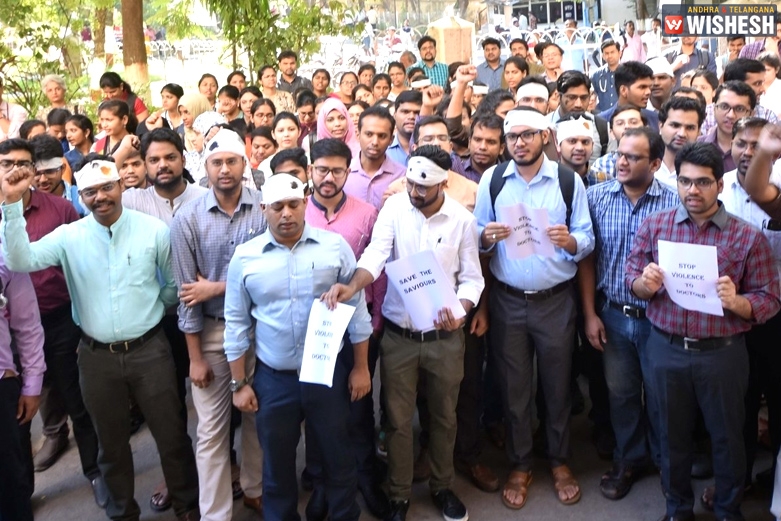 Doctors in Telugu States Stage Protests as Part of Nationwide Strike:- To express solidarity with protesting doctors in Kolkata, the doctors in government-run and private hospitals in Telugu states of Telangana and Andhra Pradesh staged protests on Friday.

The doctors all over major teaching hospitals in Telangana, on a call given by the Indian Medical Association (IMA), joined the token protest to condemn the brutal attack on a doctor at Kolkata hospital.

Doctors at Gandhi Hospital, Osmania Hospital and Nizam's Institute of Medical Sciences (NIMS) in Hyderabad and other hospitals in Telangana staged the protests, demanding an end to violence against doctors.

After the token protests, doctors attended their duties wearing black badges. The IMA had called for a nationwide protest against the growing number of attacks on doctors.

The IMA also urged Telangana government to take measures to stop the attacks on doctors. Voicing concern over the series of the incident in NIMS and other hospitals, it demanded stringent action against those involved.

Doctors in major hospitals in Andhra Pradesh also staged protests to express solidarity with their colleagues in Kolkata. Protests were staged at hospitals in Vijayawada, Guntur, Visakhapatnam, Tirupati, and Kurnool.

He said the attacks on doctors in West Bengal were highly condemnable.