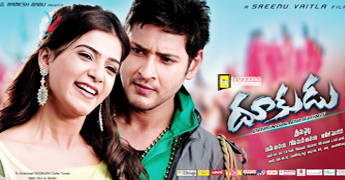 One of the much expected films of Telugu Cinema, the film for which apart from the ‘Prince’ fans every film Buff has been waiting to get released for. Right from the Movie was announced, to the casting to the director, to the audio release and now the film’s release, the film has managed to withhold the audience pulse. After a too long waiting to see this flick, Mahesh’s ‘Dookudu’ is released today. Now, whether this film has managed to keep up to the expectations or not, let’s see;

It is the story of the Cop. A Police Officer, who believes his Duty, Who believes in always doing the best, who works for killing the Crime. Mahesh plays a father’s son. But, this is not a serious or message oriented film in any ways. There is a lot of Comedy, the situations Ajay (Mahesh Babu) encounters in this film. The people he meets. How he falls in love with Samantha. How, the director has convinced the audience with the story. How was the takeoff of the film? Everything has to be seen on the Silver Screen. The story is a connect and a chain from one sequence to the other. Even if I reveal one sequence, the entire story of the film would be revealed and this would definitely be a Piracy again. Instead, I would say you should go, watch the film and enjoy the same in the theater.

After ‘Pokiri’, this film is a savior for Mahesh Babu, who has been waiting for a success from many years. Mahesh looked extra Ordinary in the film. His looks and performance skills are the show stealer of the film. His chemistry with Samantha and the heroine’s performance also are the added advantages for the film. The out and out comedy in the film, with Mahesh and comedians like Bramhanandam and M.S. Narayana, other roles played by Subba Raju and Sonia were recognized too. The Music scores and the RR composed by Thaman.S are worth mentioning. Atleast 3 to 4 songs in the film are catchy and this is a very positive sign. It is a complete Seenu Vytla’s film that concentrates on entertaining the audience. There are many other artists who contributed towards the success of the film. The item number in which Parvati Melton has appeared is a Show stealer as well.  This time, it worked. Over all, you would not be disappointed watching the film.

KV Guhan’s cinematography is top-rate and the exotic locales in the songs are well-shot. Dialogues by Kona Venkat are additional asset, few of them being hilarious. Thaman’s music is good but the background score could have been much better. Srinu Vytla’s direction was okay but despite roping in Super Star Mahesh, he has made a decent family entertainer without going for novel story.   Nevertheless, he showcased Mahesh Babu’s characterization in a new dimension and handled it carefully. A better Screenplay in the second half and slick editing could have made wonders at the Box-Office. Production values of 14 Reels Entertainment banner are good.

Dookudu has been released with huge hype with peak high expectations. The film is a Srinu Vytla’s brand entertainer that lacks novelty in the script. The film’s climax resembles the Pokiri episode and the audience feels that the act is repeated while the fans might be delighted. Prakash Raj’s role has not been etched properly and few of the scenes take you to boredom. On the positive side, Mahesh carries of the film on his shoulders with his dialogues, comic-timing, fights, dance and his charisma. He has tried out his best to land the film in the safe zone. Brahmanandam and MS Narayana are other assets for the movie. Srinu Vytla tried to play safe by including all the ingredients of Glamour, sentiment, action, romance and comedy to more extent to make it as an entertaining fare. Unfortunately, the Father-son’s emotionality did not work as it has moved with slow pace. All in All, the first half of Dookudu is pretty good while the second half is average with bit dragging, though had its own engaging moments of humor. Comedy quotient saves Dookudu to a good extent. Don’t expect too high from Dookudu so that you’ll thoroughly enjoy it.

At the Box-Office, Dookudu has the high potentiality to end up as a good commercial hit. The movie has already taken bumper openings and is in the process of creating new records in few places. The producers have released the film in the right time cashing on Dussera season and it will hugely help in the collections.

‘Dookudu’, will spell its Charm!