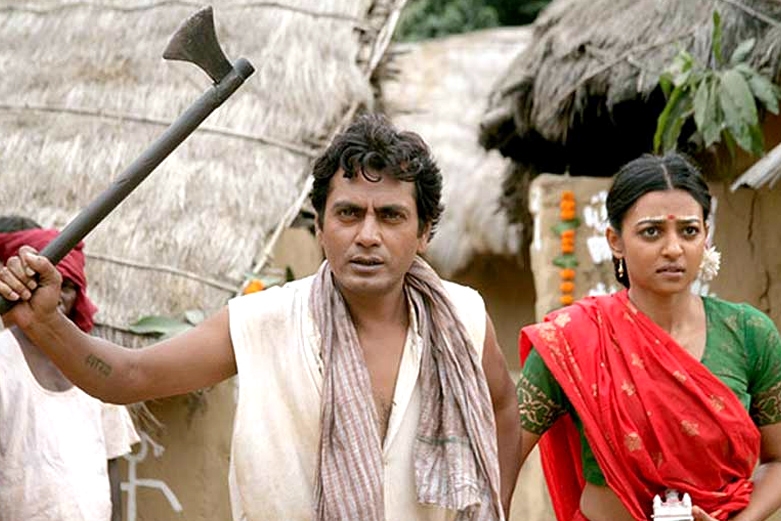 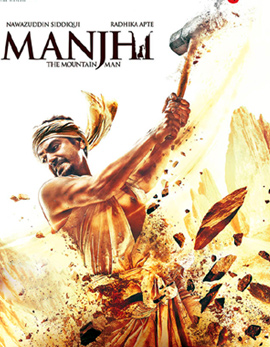 Dashrath Manjhi (Nawazuddin Siddiqui) takes birth in a lower-caste family in Gehlaur, Bihar. He runs away from his home in his childhood and decides to return back after seven years. After few situations, he falls in love with Phagunia (Radhika Apte) and marries her, against his father’s wish.

After marriage, one day, Phagunia had to climb a mountain and reach the other side, to give the lunch box to him. But upon trying to climb, she falls off a mountain and dies which separates the village from Manjhi's place of work (a farm). Manjhi now takes the issue serious and decides to break the mountain, so that a route can be formed in between.

Manjhi to complete the task, carving 360 feet long, 25 feet deep in places and 30 feet wide road through the mountain, after two decades, during which he faces several difficulties and oppositions from the people around him. He will later be applauded by the government. Manjhi leaves his breath due to the cancer at the end. 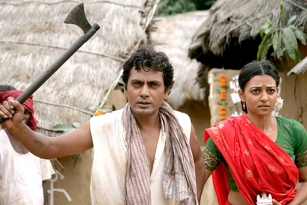 The first half of the movie is invested on showing Nawazuddin and Radhika Apte love scenes. As the plot is tough and experimental, cleverly, Ketan concentrated on showing the love story of the couple and thus made the audience sit in the theatre. There are sufficient entertainment scenes in the first half, which are not much related to the serious plot.

The way the people and the government receive Nawazuddin after completing the task, is a sure watchable scene. Overall Manjhi movie first half has enough entertainment scenes and the second half goes on an inspiring note.

Nawazuddin Siddiqui is obviously the show maker of ‘Manjhi- The mountain man’ movie. He completely steals the show, right from the first frame till the end. Especially his acting levels during breaking the mountain, the difficulties he faces while breaking it, will surely make us re-walk towards the theatre.

Radhika Apte had a limited role to play, as she portrayed a village girl character, finding glamour might be tough, but still she did her job well. Rest other characters are found satisfactory for the roles they are assigned to.

Manjhi movie has three songs and those three were pictured as per the concept, without losing the essence. Sandesh Shandilya back ground music needs a sure mention. In fact it is his music, which makes the few scenes sound more interesting than actually it is. Cinematographer Rajeev Jain ensures the abominable mountain seems intimidating, yet passive like a gentle giant that crumbles under the might of the film's lead. The production values are apt to the concept.

Director Ketan Mehta put the back ground of Manjhi, emotional, to carry out the required aggressiveness towards the mountain for breaking it. But as the film proceeds further, some scenes might just be like filling the gap. However Ketan still made Manjhi- The mountain man film inspiring.

Manjhi- The mountain man movie is an inspiring concept, unlike the regular masala entertainment, it has much lot to watch.